Click play to see the Tonka the Wombat in Action! 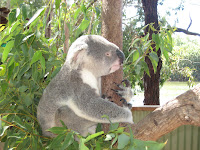 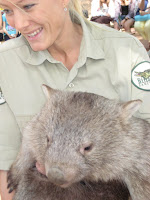 Ray the Koala                   Tonka the Wombat
Koala's are known to bring in many tourists to Queensland, giving over-exorbitant amounts of attention to the cuddliest looking of all marsupials.

But, they are among the least intelligent of their kind and native Australians roll their eyes as they explain that the Koala's brain is only the size of two peas. Their most exciting part of their day is looking at the branch in front of them, spending 23 hours a day sleeping in order to build enough energy to poo.
Our new favorite member of the marsupial clan (yes, it carries it's young in a cool pouch too) is the wombat. It is the smartest marsupial in all of Australia.
Why, you ask?
1. Wombats have a hard cartillage rear end. This comes in handy because the wombat is hunted by Dingoes and have managed to outsmart the wild dog by luring it nears it burrow. Once the Dingo is interested and sticks it head into the burrow up comes the hard cartillage butt to crush the Dingoes skull. If that is not enough, the wombat then drags the body atop his burrow mound to warn other predators lest they share the same fate.
2. The wombat is able to sense Bush fires long before other animals and during these dire emergencies, video has been taken of dingoes, snakes, padmeleons, and all other animals living in harmony in the wombats burrown while fire rages.   A notable exception to this is the Koala, who is just a tad bit too "slow" to come down from the gum trees and realize there is any danger at all.
3. The hairy nosed wombat is actually in the top ten most endangered species in the world and there are only about 50 left. Farmers might be to blame, poor little buggers. (not the farmers) Our friend Tonka, is the common brown wombat and not on the brink of extinction, but super cuddly! 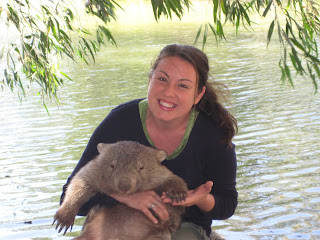 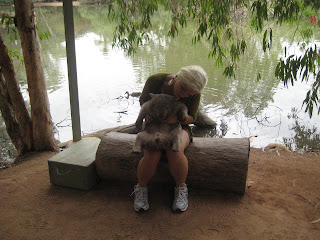 We hope you think that wombats are just as rad as we do!  Silly cute Koalas.    :P


Which do you prefer?
a. the cuddly koala
b. the wily wombat
Post your preference below!
(don't be shy now...)
Posted by Ms. Castelli and Ms. Oliveri at 9:45 PM