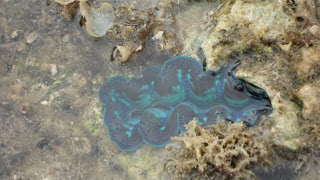 Kingdom  Animalia
Phylum Mollusca
Class    Bivalvia
Order    Veneroida
Family  Tridacnidae
Genus   Tridacna (1)
Size      Length: up to 1.3 m (2)
Weight  up to 300 kg (2)
Life span  up to 100 years
Giant clams evolved over 65 million years ago in the Eocene, along with modern corals. Both clams and corals lead symbiotic lives along with millions of single cell dinoflagellate algae called 'zooxanthellae'.
Adult clams can obtain over 90% of their food requirements from the photosynthetic products of the algae, but when particulate organic matter (POM) is present an adult clam can obtain about 33% of its carbon requirements from POM. The third source of nutrition is dissolved organic matter (DOM) but it is probably more important in larval and post-larval stages than in sub-adult and adult clams. Clams also act as natural biofilters as they take up dissolved ammonia and nitrate from the surrounding seawater to supply their symbiotic zooxanthellae with nitrogen for growth.
This enormous shellfish is the largest species of bivalve mollusk in the fossil record, and the heaviest of all the living mollusks (4). Like all bivalve mollusks, the shell consists of two valves, although in the larger giant clams these cannot close completely (5). The shell is extremely thick and lacks bony plates; when viewed from above, each valve has four to five inward facing triangular projections (5). The mantle of the clam is visible between the two shells, and is a golden brown, yellow or green, although there may be such an abundance of small blue-green circles that the overwhelming impression is of a beautiful iridescent color (5) (6). A number of pale or clear spots on the mantle, known as 'windows', allow sunlight to filter in through the mantle (5). The mantle is completely fused with the exception of two holes (or 'siphons'). The gills are visible through the inhalant siphon, while the exhalent siphon is tube-like and is capable of expelling a large volume of water during spawning or if the clam’s shells close suddenly (7) (6).
See video.
These huge bivalve mollusks are found in shallow waters of the Pacific Ocean, from Thailand and Japan to Australia and Micronesia (1). However, the giant clam’s range has reduced since the 1970s due to over-harvesting (6).
Adult giant clams are completely sessile, unable to move from their position on the coral reef. They reproduce by expelling sperm and eggs into the sea (5), where fertilization occurs. The fertilized eggs quickly enter a swimming stage, (where they are known as trochophores), before entering a planktonic stage (6). During this stage, the larvae, (known as 'veligers'), inhabit the open ocean for one week, before settling in the substrate. If a clam is disturbed it will close its shell valves (5). 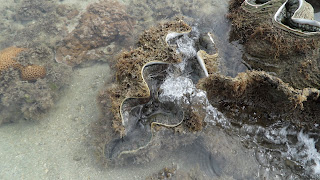 Giant clams have an inhalant siphon, which they use to draw in seawater that is then filtered for planktonic food (5). The majority of the clam's nutrients however, are obtained by a mutually beneficial relationship with minute algae known as zooxanthellae (5). These plant-like algae exist in delicate tubules which are extensions of the stomach (8). The algae gain protection from predators by being associated with such a large organism, while the clam obtains the carbon by-products of photosynthesis (9). Giant clams also provide protection for a species of pea crab (Xanthasia murigera); a single pair will often be found living within the cavity of the clam (7). 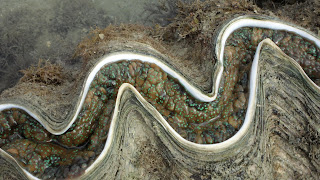 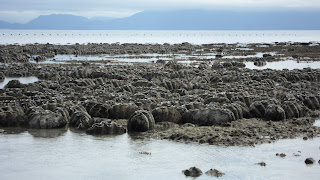 References
Posted by Ms. Castelli and Ms. Oliveri at 7:28 PM