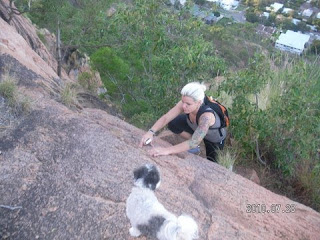 Literally climbing the face of Castle Hill!
A very common workout in Townsville is to hike Castle Hill.  Castle Hill is a pink granite monolith standing in the heart of the north Queensland city of Townsville. It rises to a height of some 938.3 feet  above sea level and dominates the city skyline. Castle Hill has formerly also been known locally as Mount Cootharinga - a name of aboriginal origin.  During World War II, the city was host to over 50,000 American and Australian troops and air crew, and it became a major staging point for battles in the South West Pacific.

Most people walk up the goat trail which is hard but hiking Castle Hill with Pip was a whole other story.  Pip is a wonderful New Zealand born lady that moved to Australia and married Paul.  They are friends with Jay "the man with the plan" that sent us here to do research.  Thanks Jay we love you!  We also love this great family who took us into their house, fed us a great dinner, and finally took us on the hike of a lifetime.  Following Pip up the mountain was a task in itself harder than we ever though.  We climbed the face of Castle Hill and prayed for our life the whole long way up.  Once we got to the top,  it was very well worth it.  There were breathtaking views one only sees very rarely.